San Francisco: What do I write about this city! I had read about it- being the high tech & start-up capital, watched it in movies like Social Network and had seen the pictures; but nothing prepared me for what I was going to experience. Since I took to traveling as a passion, have been to umpteen cities; some huge ones, some that gave a feeling of a town. The day spent in San Francisco was probably the best days of my life, and it gave me memories for a lifetime. 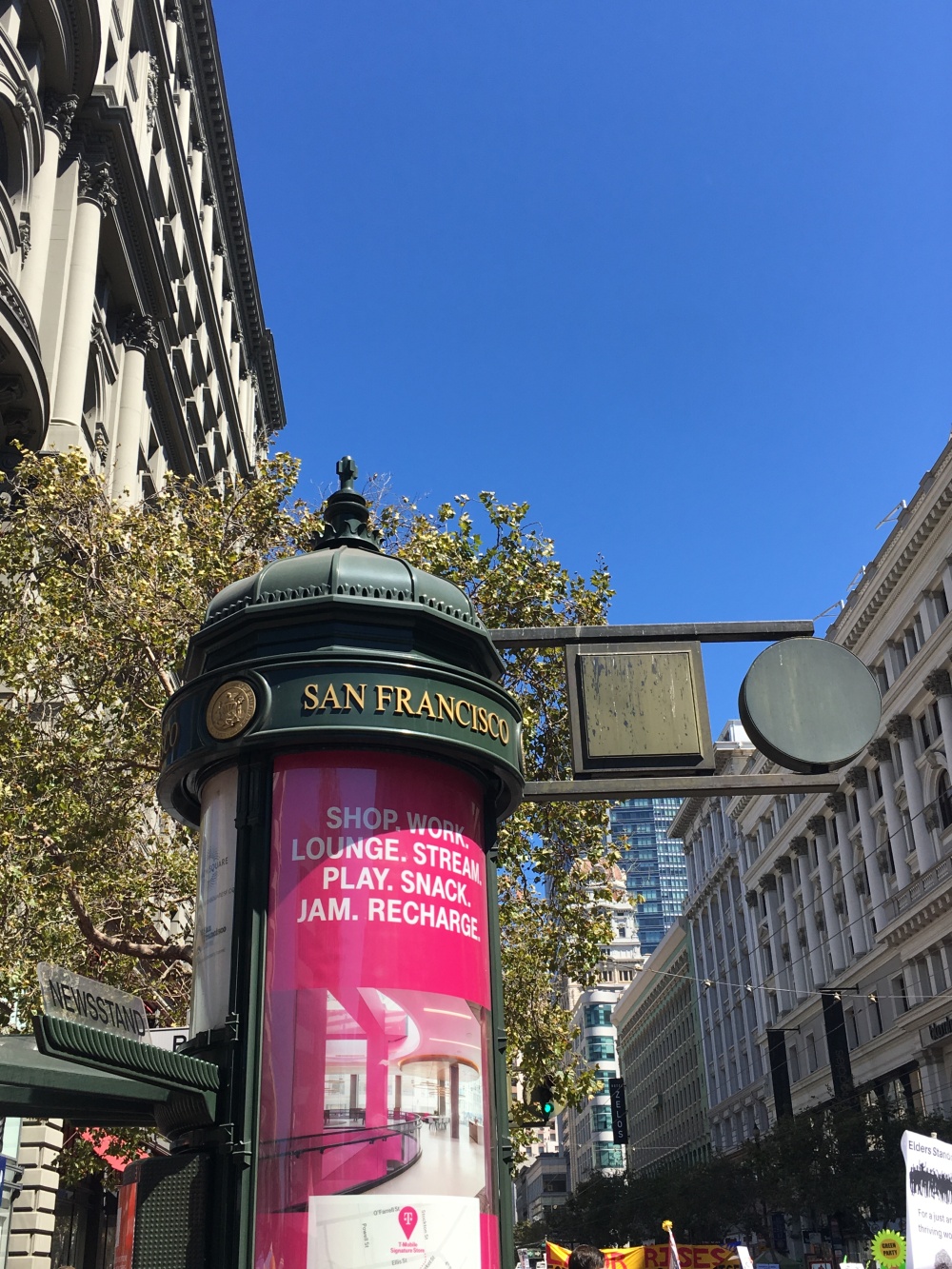 In fact, 24 hours before reaching San Francisco, I spent the previous 2 days in Los Angeles. I arrived in San Francisco with little expectation, just hoping to tick mark another landmark city from my list of places to visit. What I got in return was something that I will forever cherish.

I was staying in a suburb of San Francisco and reached the city via BART (Bay Area Rapid Transport) which is the preferred commute mode if you are going to the “city”. The best place to start the city tour is from Union Square.

A cablecar greeted me as I came out of the train station. Really!!! The only time I had seen a cable car was in the movies, and trust me, they do no justice to the real beauty of it. It’s as if they transport you into a different era altogether. 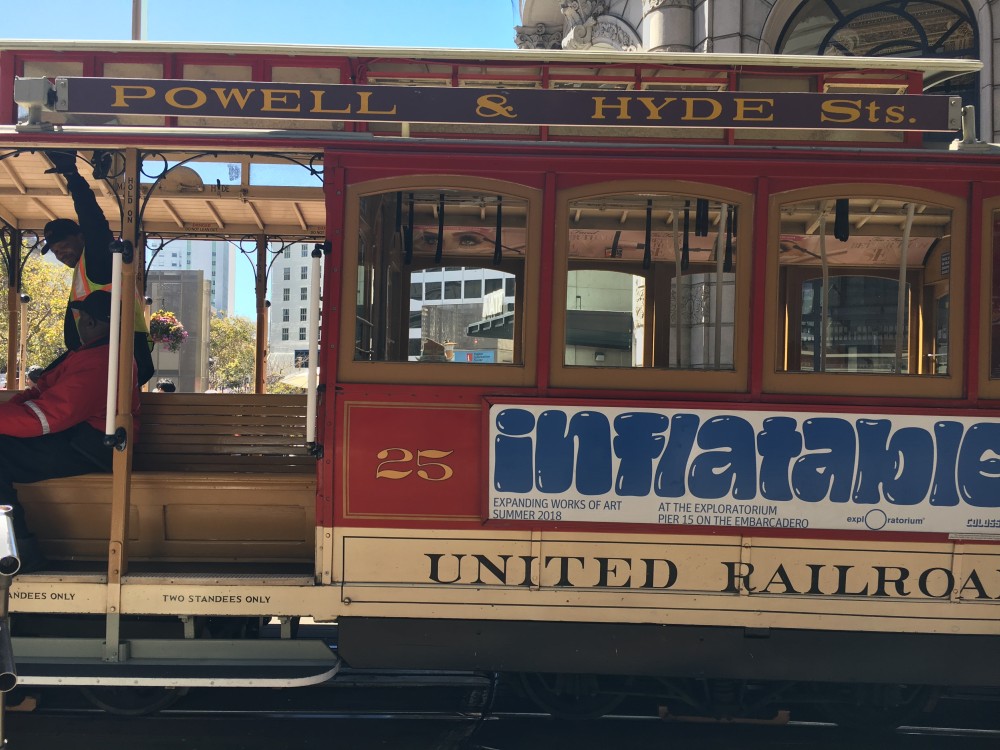 As much as I wanted to hop on into one, decided to first explore the city on foot. Once I was able to take my eyes away from the cable car, I looked around and found myself in paradise – From Saks Fifth Avenue to Nordstrom to Tiffany to every single high street brands, you could think of. The Shopaholic in me wanted to explore all these stores, but better sense prevailed, and I chose to indulge in window shopping.

The streets were crowded with tourists, and the bus tour companies waiting to fill their quota of daily trips. So many options to choose from, half day or full day.  San Fran has mild weather all year round. But even on a sunny day, things can get chilly! My friend had warned me, your best bet is to always carry a jacket, no matter what time of the year it is. Yet, I didn’t carry one and took a chance to enjoy the beautiful sunny day in Sep Spring.

The first leg of the itinerary was to walk up to Embarcadero and then to Pier 39. I had no clue how far all these places were, but the sheer beauty of the place kept me going. San Francisco is a very walkable city. Wear comfy shoes and go around, It’s the best way to see the city.

The Embarcadero with its iconic clock tower and the historic Ferry Building is a major attraction. It runs all along the waterfront from Bay bridge to Pier 39 and Fisherman’s Wharf. There are restaurants, gourmet shops, and farmers’ market is full of life, a great place for a leisurely stroll. A series of piers offering ferries, and I stood there watching people get on to the ferries. On a sunny day like this, you could go on a cruise, many of them will take you for an hour or two around the bay bridge, serve wine or cocktail on the deck and take you closer to the Golden Gate Bridge. 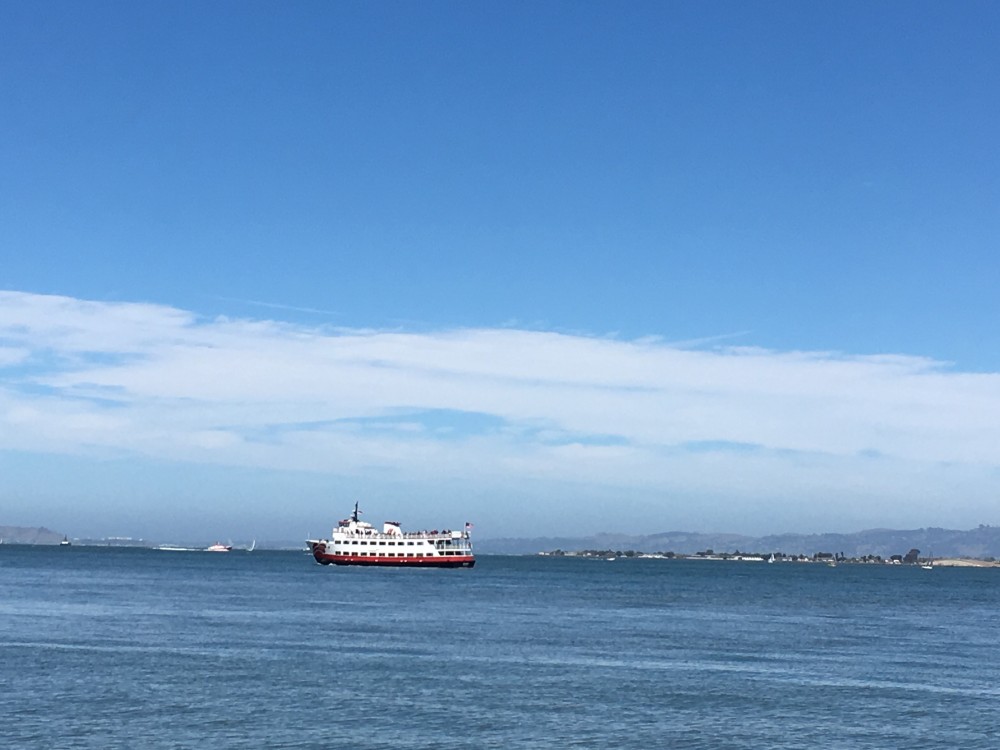 It was an intriguing walk past the Exploratorium at Pier 15 and saw some very interesting exhibits, including the fog bridge, solar clock and a sound transmission device in the shape of a hemisphere called the Archimedes. Made of cast bronze, Archimedes has two 7 or 8 feet diameter dish-like chairs placed 50 meters apart. Find a friend and occupy the seats right across and talk to each other. The other person sitting 50 meters apart can clearly hear your whispers and the voice quality is far better than a hi-end surround system. Archimedes was a smart man! Played around with few more quirky exhibits and it was great fun. 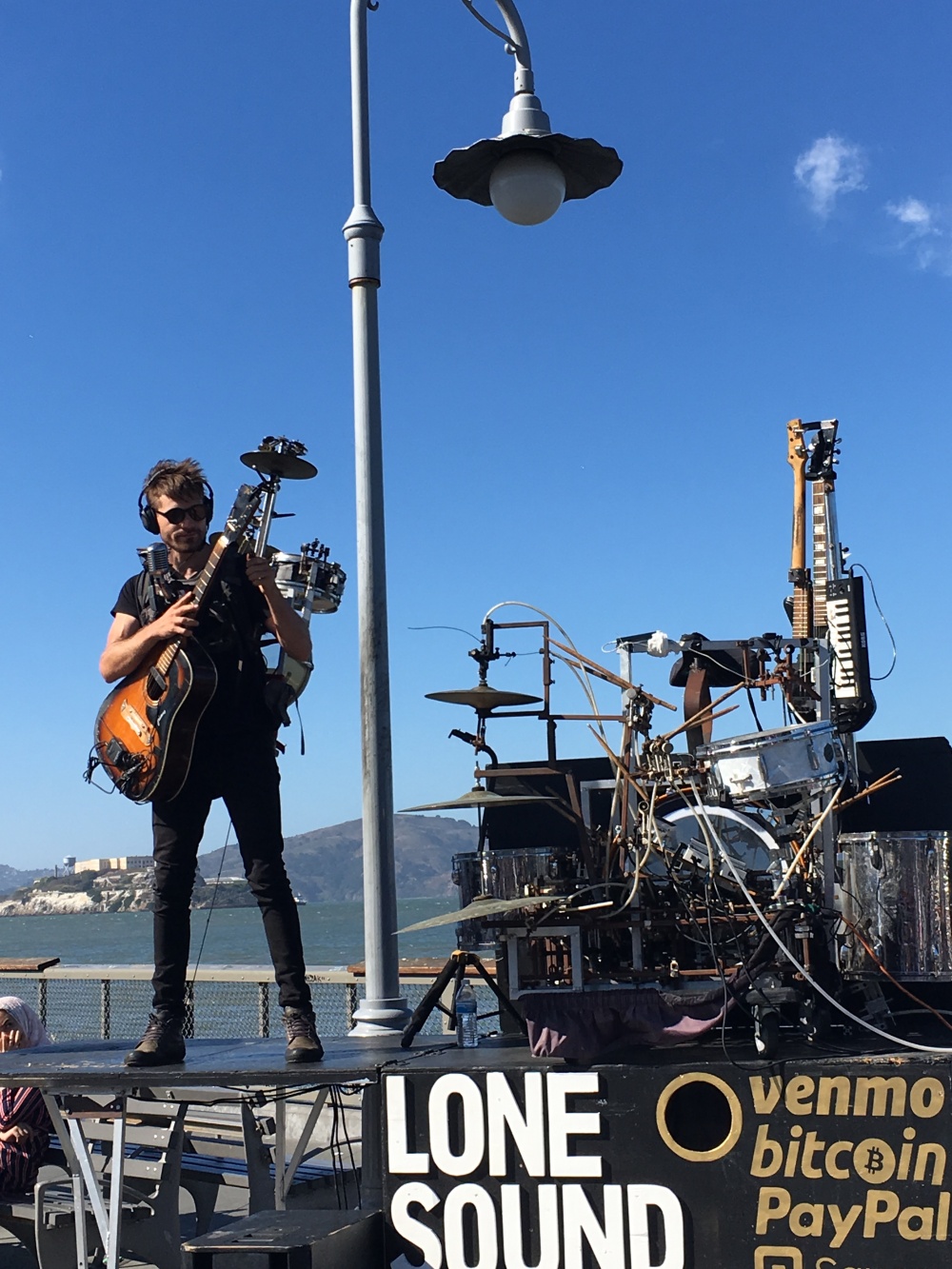 Street performers, known as “Buskers,” make the bayfront entertaining. There were magicians and musicians on the sidewalk. This Lone Musician with around 15 highly calibrated instruments including vocal of the highest caliber singing my favorite song:

I Will Always Love You -Whitney Houston

made my day. People are so passionate about their crafts. Traveling or writing for that matter seems so easy.

Remember the movie “The Rock” in which, Nicolas cage was tasked with stopping a group of rogue US marines who had seized Alcatraz Island, takes hostages, and threaten to destroy San Francisco unless they are paid $100 million. For exploring the only possible successful escape from Alcatraz prison, the escapees were presumed drowned in the bay. So the movie was shot here in this real Prison on Alcatraz Island in San Francisco Bay. However, unlike its portrayal in the movie, the island is only 2.5 km from the mainland. For decades the federal prison kept high-security prisoners locked up here like Kaalapani. I wonder why islands were prison then and a few centuries later we love to be on an exile onto those islands to escape life.

Pier 39 is the heart of the promenade. It has a true carnival feel. There are souvenir shops, food trucks, restaurants, the Aquarium of the Bay and an amazing ambiance. The carousel stands majestically as the center of attraction. Handcrafted in Italy, the carousel is intricately hand-painted with famous San Francisco landmarks including the Golden Gate Bridge and Alcatraz and twinkling LED lights with animals to ride.

The stage behind the carousel with jugglers and magicians make the live shows exciting.

There are yummy seafood stalls. Don’t forget to try the Calamari Fries and also the finger licking Fish and Chips. Oh, wait and the crab balls! There are just way too many treats to try including Chowders and fudges and mini donuts. One day is not enough to try all of those.

Following the crowd landed up at this place by name Candy Baron. I had never seen Candy’s in barrels. The variety here was mind-blowing. There were chocolates, mints, cinnamon gummies,fruit-flavored candies and their famous salt water taffy in barrels and barrels. I tried a few of those, was difficult to choose. Kids were having a gala time and Tourists were buying candies by kilos. 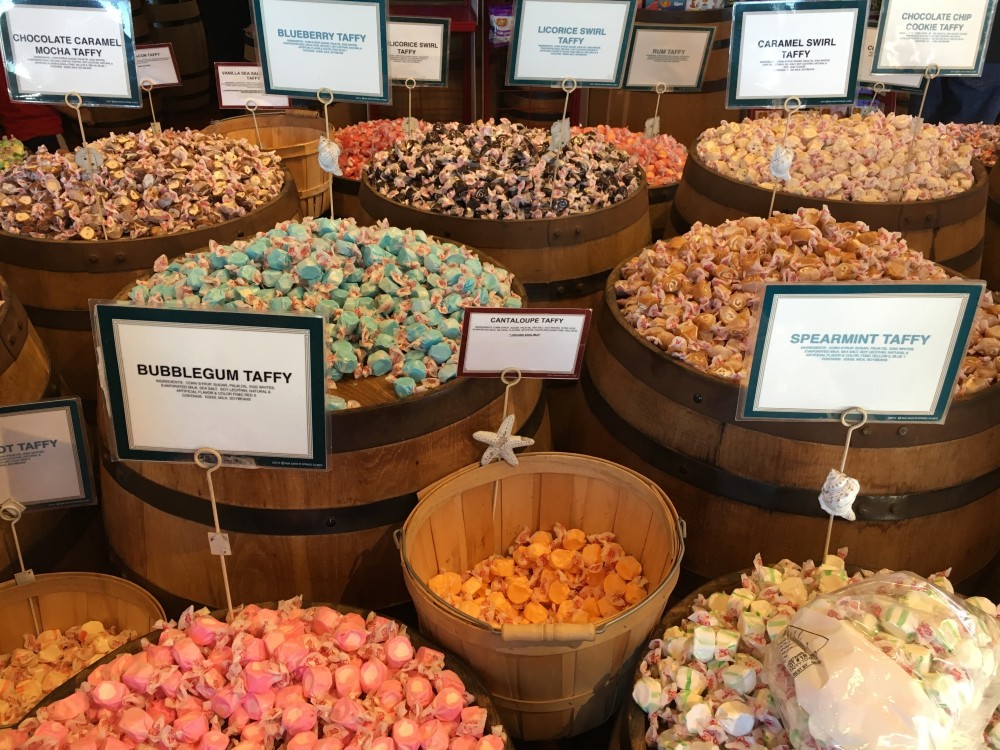 There are specialty stores like The Pearl factory – the lady at the counter showed us a demo of Hawaii’s original pearl in an oyster.  She starts with a prayer and makes us chant and then takes out her knife and flip open the oyster. At least one pearl is guaranteed in each oyster. Not sure if it was a magic show or is it that all oysters had a pearl inside. Step inside the Left Sanfranciso – A store dedicated to lefties and you could find amazing gift items.

I spent quite a bit of time wandering through the stores on the pier and tried not to buy everything. And guess what PIER 39 is named “Best Place to People Watch in San Francisco”, never knew that was official pass time.

A surprise package awaits the visitors behind the pier, sea lions hauled out on docks. This city has given me more surprises than any other. I was trying to capture the Alcatraz from a nice angle and discovered the sea lion observation deck, towards the back of Pier 39. There may have been hundreds of sea lions bathing in the sun.

The next destination is Fisherman’s Wharf, a tribute to the fishermen who sold their catches at the harbor back in the day, the Wharf is now a tourist attraction. Time for some more fresh sea food and beer.

My goal was to walk up to Ghiradelli Square, google map showed 1 km. The Square itself is beautiful and has great views of the port and a farmers market. Homemade chocolate stalls and organic produce were in abundance. A few restaurants and live music added to the charm. 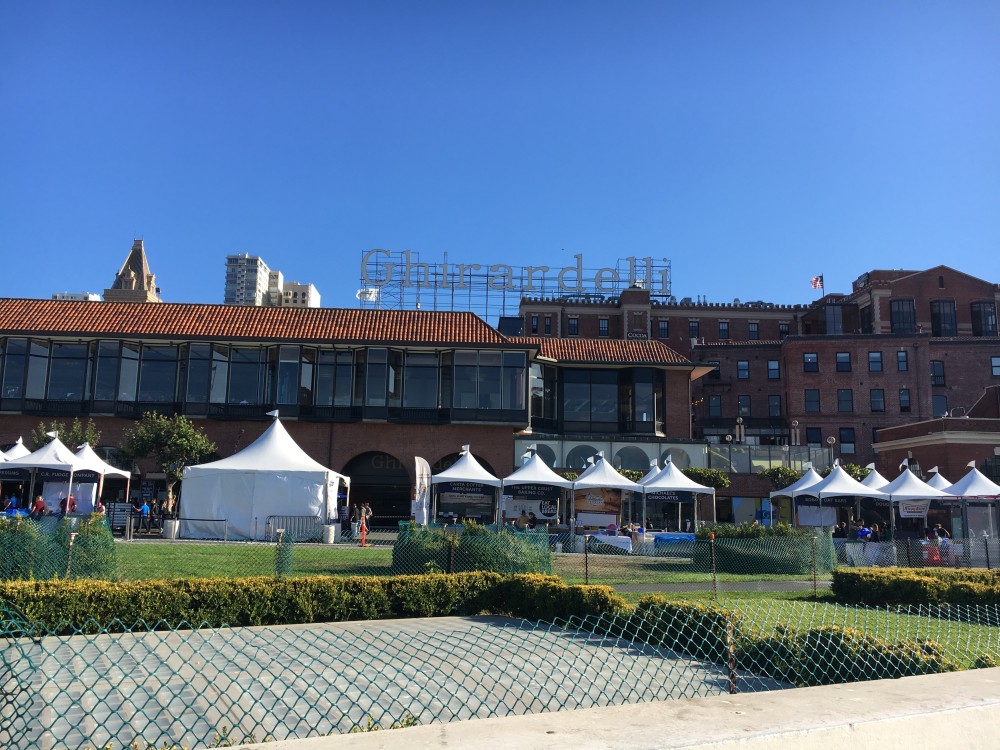 The park in front has an idyllic setting for a romantic walk with a lush green lawn and lovely trees along the bike trail. Who hasn’t dreamt of being whisked away to the picturesque park, catching up with reading or take a nap under the shade on a lazy afternoon? This is exactly the kind of travel I like, to be able to go at your own pace, stop wherever you want. No checkboxes to tick, but just go with the flow. A walk through the alleys and culture trails lost in our own thoughts, enjoying the breath of fresh air on a  beautiful day. 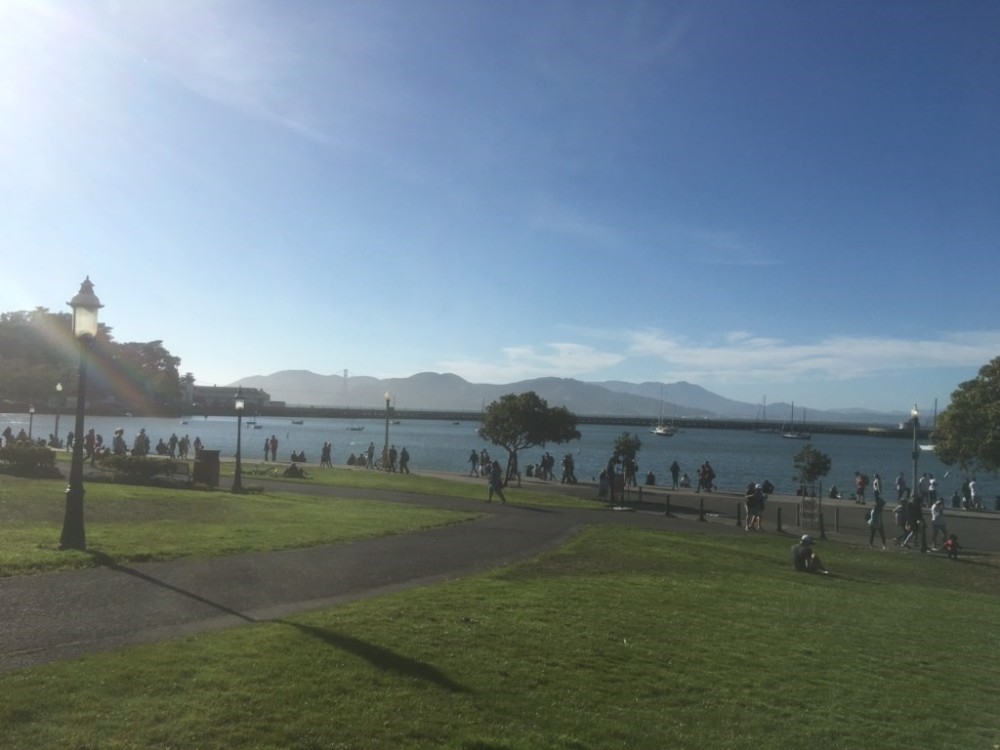 A short walk to the south is the iconic landmark of SFO The Golden Gate Bridge. One of the best ways to see it is by bike, but It’s starting to get a bit tiring with the long walk and suburban hills. It looks foggy from here. Lemme reserve that for another day. 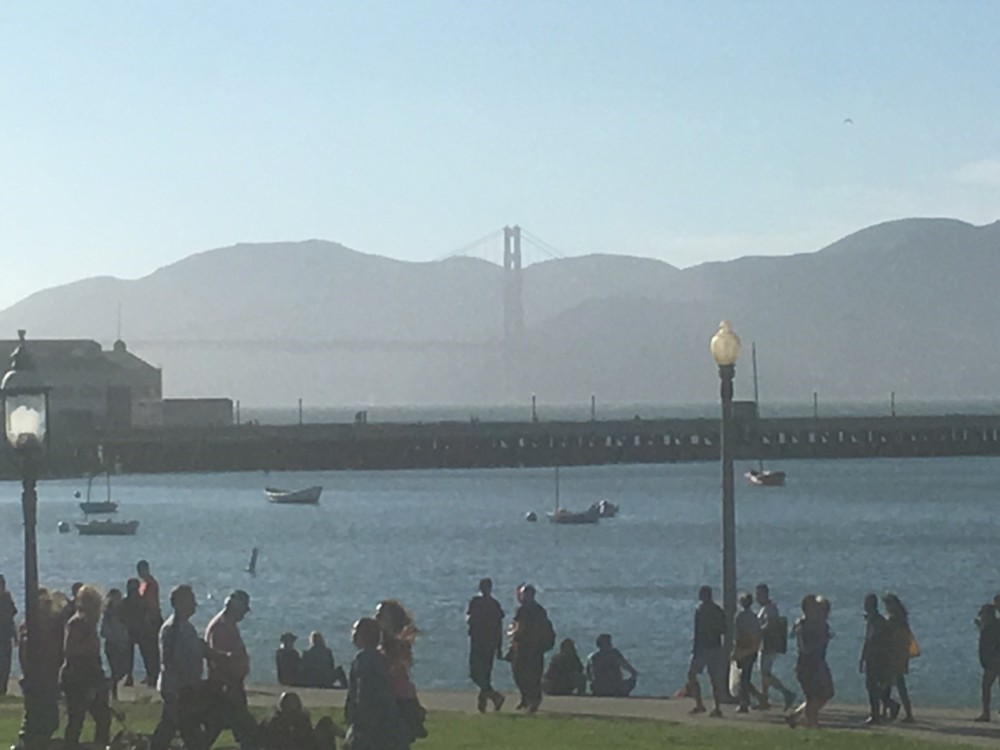 The Cable car bell refuels my energy as I have a plan now….take the ride back on this historic carriage. The queue at Ghiradelli station was pretty long. It was pretty exciting to watch the manually operated cable cars take a U-turn at the boarding point. These manually operated cars reach the endpoint and are pushed into a grove by the conductor and driver and they are turned around on giant turntables completely mechanical, relying on ball bearings and rollers to move.

The car is packed to the brim, capacity is around 50 and people are hanging from all sides. There is no engine or motor, and the car is controlled by underground cables. The driver rings the bells rings and we are ready to start. The climb uphill is slow and then vroom it goes downhill. Whoa…this is a fun ride. The hilly terrain with the steep climb and then the ride downhill through China Town makes it exciting.  The view from the top of the hill is amazing…beautiful row houses on both sides of the street, cars parked in almost 90 degrees angle.

All good things in life come to an end …and my day is ending with a BART ride back to the hotel…but looking forward to bigger adventures the next morning.

Check out my other posts on North America Beautiful Newyork City or come with me to Canada The Rockies: A Trip to Heaven