Welcome back to my travel blog! It’s been a while since I posted something new. This is my second trip to Australia in case you haven’t read the first one – it’s all about Sydney. I am pretty excited about this one as it’s all about a cool tick off from my bucket list. Exploring the underwater world at The Great Barrier Reef.

I wasn’t sure if the  Great Barrier Reef would match it’s hype, as it’s a pretty expensive destination. Also, National Geographic had warned me that the Reef is pretty much extinct due to global warming. But my heart said, give it a try. For someone like me who had never even swam in the ocean, forget diving, it was a close call.

Cairns is the gateway to the Great Barrier Reef, 3 hours 30 mts flight from both Melbourne and Sydney.  It’s a quiet touristy town, lined with bars and cafes and a massive saltwater swimming lagoon, The Esplanade. With underwater seating benches and warm water temperatures, this place is always in a party mood.  Cairns is such a small place that you would meet every other tourist/backpacker here splashing water.

We booked the trip through Reef Experience after a lot of homework.  Top Deck Club tour on a Catamaran is the best way to see Australia’s greatest natural beauty and Get the “Celebrity Feel” for $250. Never have I splurged so much for a day trip, but this one is on the top of my list and something that I wanted to do before I turn 40.

The hostel where we stayed in Cairns was right across the Esplanade. My friend Michelle had put multiple alarms to wake us up early. Vacation for me means waking up late, having an extra cup of coffee and lying around and doing nothing. There’s no everyday discipline, no mundane chores we hate doing but have to, not rushing to get ready or to head to work.

We packed a few toasts from the pantry as back up plan for the ocean trip. The itinerary did mention the day trip to the reef was all inclusive (breakfast and lunch). Thanks, Michelle Becker for the last minute reservation.

Cairns being a small town that even if you walk from any part of the town, Marlin Jetty from where the boat starts would be less than 10 mts walk. But still, the tour company provides pick up and drop for all the guests. The weather forecast mentioned a cloudy day predicted, with showers in some parts. When they say “there’s a 50% chance of rain” you never know what to expect.

The crew greeted us with a smile, served breakfast – BBQ Bacon and Egg Rolls. The boat was pretty spacious, maybe a 100 seater. There were only 50 tourists that day. Tour started dot on time and there were a few presentations – pretty lively, ones-first on safety, then on marine biology, underwater photography etc. It was pretty impressive how the crew on board were co-ordinating every detail of the reef tour as if they were all part of a family. This was mostly the end of Jelly Fish season, but they still gave us wetsuits, if not from fishes lemme get some protection from UV rays. They provided sunscreen lotion and even sea sickness tablets. Wow ..now this is one perfectly planned tour.

The first reef site took about 1 hour 30 mts.  I was expecting our boat to show up to a beautiful island with white sand as they show in movies, where we would swim through crystal clear water, and see colourful reef near the shoreline. To my big surprise, reefs are in the middle of the deep blue sea !! Not that I had any confidence or prior experience, but jumping off a huge boat into the middle of the dark depths of the ocean (not to mention in the pouring rain) did not feel like something anyone with a sane mind would wanna do.

The scary cat in me popped up and my heart was racing like nobody’s business. Sea was rough and waves were high. I didn’t know if I was ready. The pretty lady instructor asked me to rate my swimming skills on a scale of 1-10. “Well, Never swam near a beach also, am a pool fish”. She smiled and gave me a tip to defog the mask, which is to spit on to it and wipe the glass with saliva and then wash it in sea water. Really ??? Half-heartedly I did that, however that made the vision much clearer.

Wore the swim fins and snorkel and sat on the side of the boat playing in the water. There was a life jacket and a tube lying there which I quickly grabbed and added another layer of protection around me.

Donno at which point I gathered the courage to jump in. But, that moment I conquered fear. Water was warm, even though it was drizzling above the surface, all was peaceful and beautiful under the sea. At first, it felt like I had put my head inside a fish tank or an aquarium. And then realised I could float and move around. Fishes went past me and they were colourful. Yellow and blue and purple. I had only seen the gold fish and angel fish from the fish tank my cousin had while we were young.

Fishes big and small surround you and not even acknowledge you ..they just go about doing their business…

Thanks to my new friends Alissa & Cassandra. Who knew that you could make friends underwater aswell. And we were on a finding Nemo mission!

Got back onto the boat after a while, mesmerized by the underwater wonder of the reef. The boat started in the direction of the next reef. Buffet style lunch with a wide variety of foods was served.

By the time we reached the next site, the sun was shining brightly. This was a shallow lagoon. And the Marine Biologist onboard was organising a tour for the enthusiasts. Michelle joined the tour as I jumped back into water exploring forests of coral, large sea fans & black coral trees in its shallow lagoons.

Soo shallow that it’s hardly one meter from the surface …I was scared that I would touch them by mistake and would either end up destroying them or all of those organisms would grow into a giant squid and gulp me in….(Tip : Movies scare the hell out of you! )

The other side had crystal clear water with bright sunlight and it was one of the most beautiful sights I have ever seen. 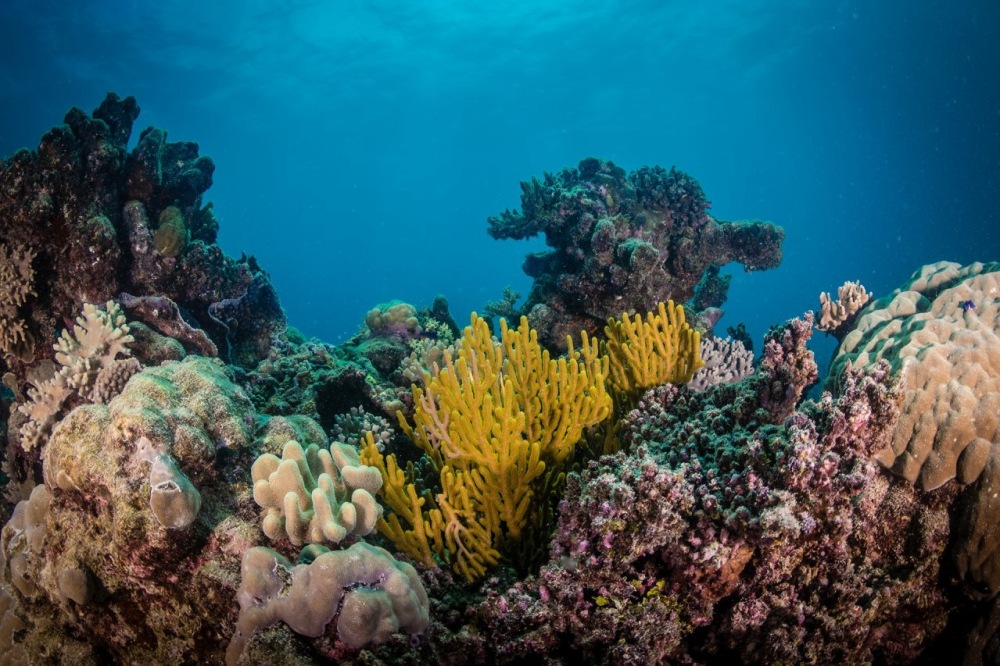 Maori wrasse Fish. These big-boned fish love to play and will happily follow you around like a faithful friend and pose for pictures. You won’t believe but they are quite romantic and are mostly spotted in solitary male female pairs.

The ocean carried me away from the boat. I had to swim back quite a distance, through the deep ocean for what felt like an eternity through the magical underwater world before reaching the boat. But was once in a lifetime experience !

I had planned to fly home the following day, so the staff informed that I couldn’t take the introductory dive because there are health risks involved when diving and flying within 24hrs. I was seriously disappointed with my blunder. Hell, who cares .. snorkelling made my day.

Back on the deck, to top it all Glass of wine and cheese were served as we returned to the shore with heart full of memories.

Check out more Aussie Adventures at My Celebrity Flush